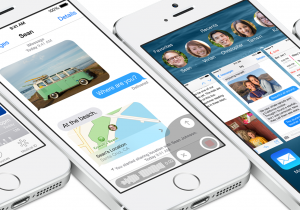 Apple held its yearly Worldwide Developers Conference (WWDC) in San Francisco, California on Monday and revealed the latest features that will be included in the new release of their mobile operating system, iOS 8. While the company calls the release one of their most massive updates, we’ve highlighted some of the more useful additions in order to help you and your business use these latest features.

With the updated mail interface, Apple has simplified many of the commands and enhanced the multitasking capabilities. One of the biggest changes, though, is the addition of Mail Drop. While most email services limit email attachment sizes to 25MB, Mail Drop allows users to send files up to 5 GB by linking the recipient to a web page to download the file.

If you’re running late for a meeting, you can now text your location to your colleagues and clients directly through iOS 8’s updated messaging system. Third-party applications already allowed for this feature, but the company has now integrated it directly into their operating system.

With Windows and Android already supporting this feature, Apple finally gets on-board with enhancing calls through WiFi. This means that if you’re in an area with poor reception, you’ll have better call quality and won’t have to rely on your phone carrier’s signal to make and receive calls.

One of the most useful enhancements that Apple is adding with iOS 8 is an updated battery monitor. While the devices have displayed the percentage of battery life left for some time, this new monitor allows users to discover which applications are draining the battery and close them as necessary to extend the battery life.

QuickType is the new predictive typing keyboard which will predict the next word in a sentence based on past history and sentence context. It will also gauge the different typing styles of the user, whether more casual in iMessage or more formally with business mail, and alter its suggestions based on this knowledge.

While many of the updates will be directly useful for businesses, Apple has also unveiled new features including HealthKit. HealthKit allows users to monitor their exercise, blood pressure, and more, in addition to integrating health records from medical providers. Though this may only seem useful to the individual, encouraging employees to utilize this data to increase health and wellness has outstanding benefits for not only the organization and its work as a whole.

iOS 8 is currently in beta and will release this Fall. For more information on the latest iOS 8 updates, check out Mashable‘s 6 Biggest Moments of Apple’s WWDC 2014 below: